Before you go and play paintball for the first time you need to decide on what you’re going to wear.

While some players tend to opt for the normal attire of a long sleeve t-shirt and blue jeans, others like to go all out and wear cool camouflage clothing such as BDU’s. Now whatever you decide to wear when you go paintballing is really up to you, but there are definitely some guidelines you’ll want to follow in order to ensure you have the best time possible.

To make it quick and simple, here’s a brief overview of what kind of attire you’ll want to wear when playing paintball for the very first time.

Although it’s far from necessary, many players do prefer to wear something to cover up their head as it can be a bit of a sensitive area. While a simple option would be to wear a fitted baseball cap backwards, you can also choose to wear a headwrap, beanie, etc.

Wearing a headband is another good option as well as it does a great job at both protecting your forehead and soaking up the sweat. Not only does keeping your foam dry make your paintball mask more comfortable to wear, but it also greatly reduces the chance of your lens fogging up from condensation.

Now before I tell you the best types of clothes to wear when playing paintball, let me start off by telling you what types of clothes to avoid. To begin with, try not wear anything that leaves too much of your skin overly exposed (shorts, t-shirts, tank tops, etc.). Even if you’re one of the rare few who isn’t afraid of being shot by a paintball, you have to remember that you’re going to be doing a lot of crawling, kneeling and possibly even sliding around.

Of course, you’ll also want to avoid the beginner mistake of wearing too many layers of clothes as you could easily get overheated from all the running around. Instead, you’re better off wearing a layer or two of light loose fitted clothing that doesn’t prohibit your ability to move around and stay nimble.

No need to go out and buy any super fancy paintball gear either. All you need is a baggy long sleeve t-shirt and some relaxed fit jeans or cargo pants and you’ll be good to go. If you do want to get fancy though and you plan on playing woodsball (or maybe preparing for a scenario) then you can always take a trip down to your local Army Surplus store and buy you some ACU/BDU’s.

Now before you decide on what type of shoes to wear when playing paintball you first need to decide on whether you’re going to play woodsball or speedball. If you’re going to play woodsball (or scenario paintball) then the best type of shoes to wear are those that have a decent amount of tread and preferably some form of ankle support. Running shoes, hiking boots and trail runners will all work perfectly fine.

Many players even choose to wear combat boots to enhance the realism of playing paintball, but let me be the first to tell you that unless you’re trained to wear them (or you’re a really big guy or girl) then it’s probably not a good idea. Even though combat boots may prove to be somewhat useful in a woodsball environment, that usefulness is usually outweighed by the extra weight you’re forced to carry around.

Cleats are another great option to wear when playing paintball as well, but they’re typically better suited for speedball than woodsball. While the rubber spikes may work great when you’re running around on grass and turf, they don’t tend to fare too well when walking on wood, concrete, rocks, tree stumps, etc.

Now as far as what type cleats are best for paintball I would have to recommend either soccer or football cleats, but you can also wear baseball cleats as well. Just make sure to avoid wearing cleats with metal spikes as they’ve been known to pop inflatable bunkers and injure other players.

You should also avoid wearing any open toed shoes such as sandals as it will greatly increase your chances of injuring your feet. Wearing brand new shoes is also not a very good idea either as they can be hard to run and move around in. Instead, it’s best that you stick to wearing shoes that are familiar, comfortable and broken in.

While it may not be necessary to wear gloves when playing paintball, there’s no denying that they definitely do a great job at protecting your hands. Besides simply cushioning the blow of being shot by a paintball, gloves also help to protect your hands and fingers from other common injuries such as cuts, scrapes, thorns, splinters and rub burns.

Not all gloves are made the same though so you need to make sure you’re wearing the proper kind if you don’t want to hinder your performance. This mainly means to avoid wearing any type of gloves that are overly large (such as bulky garden and winter gloves) as they tend to get in the way of the trigger guard when you’re shooting.

A better option would be to instead wear gloves that offer some form of protection while simultaneously allowing the proper movement of your fingers. And while paintball gloves and specialty work gloves from Mechanix are typically your best bet, you can also wear golf gloves, weightlifting gloves and many other types of gloves as well. Many players even choose to wear fingerless gloves (or cut off the index and middle finger on a pair of gloves you already own) in order to be able walk the trigger as fast as possible.

Clothing Tips to Consider Before You Go Paintballing

Now that you know the basics of what to wear when you go paintballing, let’s discuss a few more helpful tips that will ensure you come dressed in the best paintball attire possible.

Dress for the Weather

One of the most important tips to remember is to always keep the weather in mind when you’re going to play paintball. While many beginners will choose to wear thick clothing such as a sweatshirt in order to reduce the pain of being shot, this may not be a good idea if it’s during the middle of the summer and the weather is hot outside.

That’s why we recommend for you to wear a layer or two of light loose fitted clothing that you can easily strip away if you begin to get overheated. On the other hand, if the weather is extremely cold outside then you need to make sure to wear warm clothing such as gloves, thick socks, a beanie and a sweatshirt.

Since you’re going to be doing a lot of kneeling, crawling and possibly even diving around, you need to make sure to wear old clothing that you don’t care about getting torn or dirty. And while most paintballs on the market are filled with a water soluble dye that easily comes off after being washed, some of the cheaper brands of paintballs can definitely be a little more prone to staining.

Now if you’re really worried about your clothes being stained then you can always bring along a stain remover of some kind, but as long as you wash your clothes soon after getting home and don’t let them sit in the sun for too long then you should have nothing to worry about.

Stick to Dark Colors or Camouflage

Not only is light colored clothing easier to stain, but it also causes you to stick out like a sore thumb when playing in a woodsball environment. If you plan on playing speedball however then this may not be that big of an issue, but if not then you definitely want to wear either dark color clothing or camouflage to further reduce your chances of being seen by enemy players.

Extra Protection Can Be Used

Getting shot by a paintball can certainly hurt a little (and leave bruises) so you may want to wear extra protection in order to reduce or eliminate the pain of being shot. The best type of protection to wear in paintball are chest protectors, neck protectors, elbow/forearm pads, knee/shin pads and a cup or slide shorts. You can also wear a headwrap or headband to help protect your head from being directly hit by an incoming paintball, but a simple baseball cap will always suffice.

Bring Spare Clothes or a Towel for the Ride Home

You’re more than likely going to leave the paintball field covered in dirt and splatters of paint so it’s probably a good idea to bring along a set of spare clothes or a towel for the ride home. I’ve even seen other players or parents cover their backseat with a bedsheet just to keep their vehicle from getting dirty. 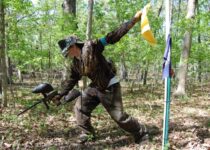 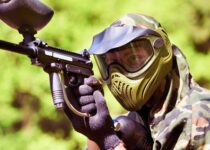