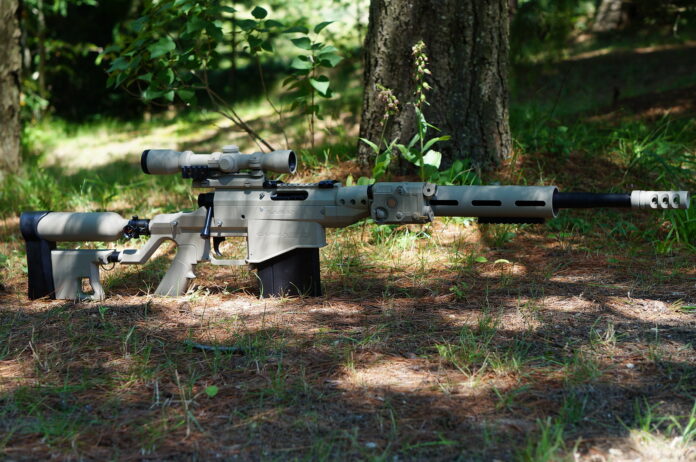 When I first started playing paintball back in 2008 there was a lot of controversy surrounding paintball snipers.

Is is actually possible to snipe in paintball?

While some players would argue that it was possible to be a paintball sniper, others would simply deny their existence. Stating that it’s impossible to snipe in paintball as no paintball gun could shoot further than another.

Even though this wasn’t true, as you could easily increase your range by using a barrel such as the Flatline from Tippmann or the Apex from BT. In the end, you were essentially exchanging range for accuracy. And paintball snipers need accuracy.

Fortunately, those days are long gone. Now you can shoot up to 50% further, and with even greater accuracy using First Strike projectile rounds. Not all paintball guns are compatible with FS paintball rounds though, so you’ll have to do your research before making a purchase.

Or.. you can save yourself some time by reading our reviews of the top 5 best paintball sniper rifles listed below. Choose any of these 5 paintball guns and you will be more than qualified to become a paintball sniper.

The most affordable paintball gun for snipers is the Tippmann 98 Custom.

Built to withstand being dropped on the ground, dragged through the dirt and mud and virtually anything else that can happen on a woodsball field, the 98 Custom is the perfect entry level marker for snipers.  And at a price range of around $100 to $150, you surely won’t be able to find any other paintball gun that’s as dependable or with as many available accessories for customization.

You can equip the 98 Custom with a buttstock, a barrel, a double trigger and even an egrip or response trigger if you ever want to increase your RoF (Rate of Fire). However, if you really want to transform your 98 Custom into a suitable weapon for sniping you’ll have to buy a magfed conversion kit from a brand such as Tacamo or Tippmann. A magfed conversion kit will allow you to transform the Tippmann 98 Custom into a magfed paintball gun capable of shooting First Strike projectile rounds.

Other features that come standard with the Tippmann 98 Custom include a split receiver design for easy customization and maintenance, a Picatinny rail for the installation of a red dot, scope, etc. and a matte black finish that’ll resist impact and wear. And if you have a little extra money you can even get an upgraded version of the Tippmann 98 Custom with ACT (Anti Chop Technology) to eliminate paint breaking in the breach of your gun.

From the creators of First Strike paintballs is the Tiberius Arms T9.1.

This magfed paintball gun can be easily transformed from a tactical pistol to a full-size rifle in a simple matter of seconds. All you have to do attach the adjustable buttstock, front shroud, and barrel and you’re good to go. You can even use the T9.1 as a compact rifle for CQC (Close Quarter Combat) by attaching a foregrip instead of the front shroud.

So what makes the Tiberius Arms T9.1 one of the best paintball guns for snipers?

Besides being able to shoot First Strike rounds, the T9.1 is also lightweight, easy to maneuver, and only requires a small 12-gram CO2 cartridge in order to be fired. And if you have the extra money you can also buy an air-thru adjustable stock integrated with a 13/3000 HPA tank. Using compressed air instead of CO2 will make your shots even more consistent.

The only downsides of the Tiberius Arms T9.1 is its 8-round magazine capacity and the inability to switch from CO2 cartridge to HPA tank on a moment’s notice. Thankfully, the T9.1 comes with a dual-feed setting that allows you to attach an elbow feed to the marker if you ever want to use a loader instead of a magazine. To switch from magazine to hopper mode all you have to do is twist the end of your barrel.

The First Strike T15 is designed to look and function just like the AR-15.

So much so that the body of FS15 is the exact same size and shape as the AR-15, making it a true 1 to 1 replica of the actual firearm. It even comes with a charging handle to make the T15 feel even more realistic.

Don’t let the looks of this paintball gun fool you though, the First Strike T15 is one of the best paintball sniper rifles that you can buy. And unlike the T9.1, the magazine on the T15 is capable of holding 20 regular paintballs or 19 First Strike projectile rounds. The extra firepower is definitely a nice feature.

Other useful features that come with the FS15 is a lightweight yet durable aluminum body, an aluminum handguard with multiple ⅞” tac rails for mounting accessories, and an adapter that allows you to easily switch from magazine to hopper feed with the simple twist of the end of your barrel.

Another advantage of the FS15 over the T9.1 is that it comes right out of the box with an adjustable air-thru stock integrated with a 13/3000 HPA tank. Unfortunately, you can longer use a 12 gram CO2 cartridge like you could with the T9.1. 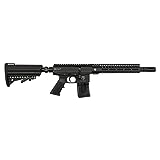 The Dye Assault Matrix (DAM) is one of the top paintball guns for snipers and marksman alike.

The advantage of the DAM over other magfed markers is that it’s essentially a high-end tournament gun in a tactical woodsball body. Not saying there’s anything wrong with using a mechanical paintball gun, but there’s no denying that a high-end electronic marker is typically going to be more consistent, quieter and shoot at a faster RoF (Rate of Fire).

So how does all of this help as a sniper?

Being more consistent means better accuracy, having a quieter shot means you’re less likely to be heard or found and being able to shoot at a high RoF may not be the way of the sniper, but it can certainly come in handy if you ever find yourself in a sticky situation. Plus there’s nothing better than being able to shoot 10-20 First Strike rounds with your DAM set to fully automatic.

Another feature on the DAM that is useful for snipers is the competition-grade trigger. Equipped with vertical ridges and extra-wide face, the trigger on the DAM provides a steady trigger pull in even the most adverse conditions. You can even adjust the amount of trigger pull to get it just the way you like.

Check for Price on DyePaintball.com

There’s no paintball gun more accurate than the Carmatech SAR12.

In fact, legend has it that the SAR12 is so accurate that it can shoot the wings off a fly.

Okay.. maybe that’s a bit of an exaggeration, but there’s no denying that the SAR12 is one of the best paintball guns for shooting players at long range.

Don’t just my word for it either, the accuracy of the Carmatech SAR12 has led to three back to back victories at the ODX Top Sniper Challenge in 2013 and 2014. With all three wins coming from different sniper teams and shooters.

So how accurate is the SAR12 exactly?

The impressive accuracy and range of the Carmatech SAR12 is thanks to its unparalleled consistency, its 20-inch Nemesis rifled barrel and its Supremacy Scope from Carmatech. While the 20-inch Nemesis rifled barrel increases the accuracy and efficiency of the marker when shooting First Strike rounds, the Supremacy Scope helps with aiming through the use of features such as 1-6x variable zoom, 3.8-4.2 inch eye relief (to allow room for paintball mask) and range estimation at 10 yard intervals (40-130 yards).

The Carmatech SAR12 also can be bought as either bolt action or semi automatic. Bolt action being the favorite amongst the milsim crowd. 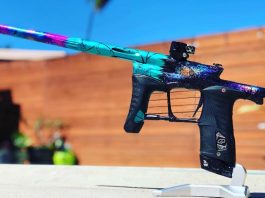 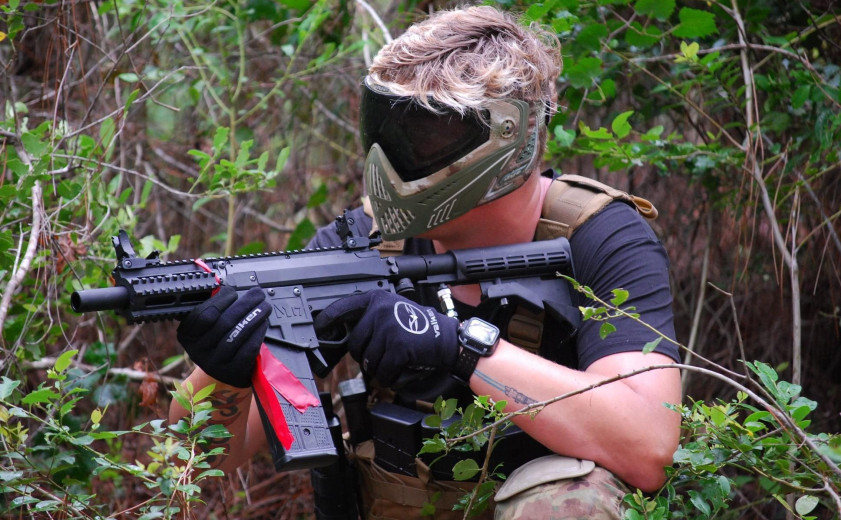