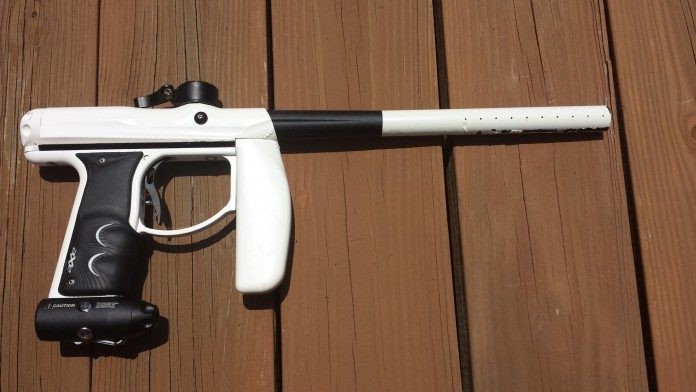 Most paintball players will note that the style and the look of the paintball gun they are using do not really count for much. ‘As long as it shoots accurately, I’m completely satisfied’, they tout. Well, chances are that they have never held this gun in their hands!

Elegantly designed, its sleek and polished appearance will make you the talk of the local weekend warriors. And the best part is that you have a bunch different colors of the gun to choose from, from dusky black, all the way the way to blue and pink.

In all seriousness, we tried to count but every time we came to a definite number, we found yet another color (so we gave up) our closest guess is anywhere between 15 and 50!

Empire Paintball is definitely one of the leading experts in the manufacture of paintball equipment. They are dedicated to style and function, so don’t go assuming that just because it looks good, this model won’t perform well. The Empire Axe is one of the fastest and most accurate paintball guns on the market!

Features of the Empire Axe

This Empire model aptly named Axe, is made from highest quality materials, is resilient, and can take a field beating like you wouldn’t believe. This is a hallmark of a great gun; you can run around with it all day, bang it and drop it around and it won’t fall into pieces in your hand.

This gun just feels right, if you know what we mean. It feels like an extension of the holder’s hand, and it is perfectly balanced. Other guns might suffer from poor weight distribution, but not this one. It will stay securely in your hand throughout the day, and won’t fatigue your arm nearly as much as some of the others we’ve tested.

–   Relay ASA – Changing the tank bottle can be a drag with some markers, but not with this one. It features Empire Relay ASA that facilitates an easy and quick removal and attachment – which is of the essence when you’re in the heat of the battle! There is no macro line, which is definitely a plus as they often just get in the way.

–   Internals – The internal workings of this gun are as simple as they come and features a bolt, a spring, and a power tube. This simple yet effective design makes the gun powerful and easy to maintain and clean, even when you’re out on the field.

–   Trigger – Both the trigger and the trigger guard give you plenty of space for your fingers, so if your hand is a bit bulkier than normal, there is no need to worry; this gun can definitely accommodate it. Walking the trigger is easy and there are three ways you can adjust it; magnet tension, post travel, and activation point.

–   Barrel – Axe is fitted with a 12-inch aluminum barrel that allows for accurate and consistent shots. The paint will simply shoot out like an arrow in the precise direction you want it to go!

Advantages of the Empire Axe

This paint gun model has a lot going for it, and it is definitely miles in front of the competition in many aspects. Here are just a few things that Axe has to offer that will make you a menace on the playing field.

–   Velocity adjuster – Axe has a very efficient and easy way of adjusting the overall velocity. It is not the regulator, but a velocity adjuster at the back of the gun. Keep in mind that it is very sensitive, so a ¼ turn will most likely result in -/+ 10 FPS.

–   A number of firing styles – You can easily choose between four different firing styles and those are Semi, PSP Ramping, Millennium Ramping and NXL.

–   Ergonomically designed handle – The handle is specially designed to fit the hand of the most players. The gun lies well in your grip, and the ergonomics allow you to handle it for an extended period of time without it tiring your hand out.

–   Lightweight design – The overall weight of the gun is somewhere around six pounds. This is achieved thanks to the use of lightweight materials in manufacture, such as aluminum. This, coupled with the guns excellent design and grips, allows you to stay on the field for hours at the time without ever noticing its weight.

–   Push button bolt removal – The engine can be easily accessed for maintenance and cleaning. Simply press the release button to the side, and the ball bearing will depress, granting you access. A great thing about this simple design is that it easy to get to and clean in a hurry and on the field, and there is no fear that you might mess something up, block the air transfers, or return the bolt back upside down.

Since nothing in life is absolutely great, we feel obliged that the Empire Axe also has several drawbacks that even other buyers were quick to point out. Some can expect some difficulty when aiming due to the relatively short stock barrel. This, however, is easily remedied as you can purchase a barrel of the desired length and fit it to the Axe. Others point out that the ASA is not adjustable, but agree that all these are minor faults that don’t compromise the quality of this, otherwise, great gun.

When all is said and done, we are happy to recommend Empire Axe to all players that are looking for a top-preforming paintball gun at a reasonable price. With the purchase, you will also get extra screws, lube and O-rings. As you can see, Empire Paintball is definitely committed to making your life easier and your play more enjoyable!

Check for Price on Amazon

My name is Evan Graham and I’m a paintball sniper. I’ve been playing woodsball, rec ball, and scenario paintball since 2007. After playing hundreds of games and attending scenarios all over Florida, I decided it was time to give back and help the paintball community at large. I hope you enjoy my paintball guides, tips, gear reviews, and more!

How Long Does a Paintball Game Last?

Pbreview.org is dedicated to helping you find the best paintball gear possible. We review all the latest markers, masks, loaders, accessories and more!
Contact us: admin@pbreview.org
© pbreview.org