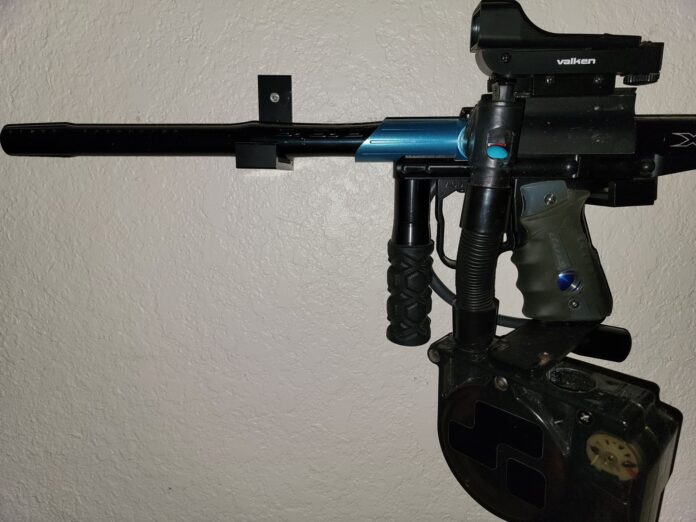 Cleaning a paintball gun is kind of like brushing your teeth. Failure to do it often enough will eventually result in bad things happening.

Over time the lubricant inside your paintball gun will slowly dry itself out and the marker’s internals will become covered in layers of oil, paint, dirt, and grime. The problem with having a lack of lubricant and an excess of crud inside your marker is that it will eventually lead to bad performance (or no performance) and expensive repairs.

Thankfully all of these problems can be avoided by simply cleaning your paintball gun on a regular basis.

To clean a paintball gun begin with removing the barrel and cleaning it with a squeegee. Once that’s done, then you’ll need to take apart the marker, clean the internals with a cloth or paper towel, add lube or grease where needed, and then put the marker back together. Then you simply need to clean the outside of the paintball gun with a slightly damp cloth and use Q-tips soaked in rubbing alcohol to clean out the tiny cracks and crevices.

Remember, not all paintball guns are made the same so you can’t clean them all the same either. Continue reading below to make sure you know how to clean your paintball gun the correct way.

How to Clean a Paintball Gun

If you’re new to playing paintball then cleaning your marker for the first time may seem like a dangerous task. After all, the last thing you want to do is take apart your marker and end up losing an important part or not being able to put it back together correctly.

Don’t worry though, I’m going to walk you step-by-step through the process of how to clean your paintball gun the correct way. Once you’ve read all seven steps you have no problem performing maintenance from this point on.

Once you have all the materials listed above then you are now ready to clean your paintball gun.

Step One: Degas the Paintball Gun

The first step to take when cleaning a paintball gun is to remove any Co2 or HPA tank connected to the marker. After you’ve removed the air source from the paintball gun then I recommend you pull the trigger (with the safety off) with the barrel facing away from anyone to make sure there’s no leftover air (or Co2) in the marker.

Failure to properly degas your paintball gun before taking it apart could result in a quick trip to the hospital for you and anyone else sitting or standing nearby.

The next step to make when cleaning a paintball gun is to remove and clean the barrel. There are two tools commonly used to clean paintball barrels and that’s the barrel swab and the squeegee.

While a squeegee is technically any type of device used to clean the inside of a paintball barrel, I typically think of a squeegee as the pull-through rubber device with multiple “cleaning rings”. Here’s an image of a squeegee below.

The best way to clean a paintball barrel is to soak it in hot water with a small amount of dish soap for 10-15 minutes. Once the barrel is done soaking then you can either air-dry it or use a clean barrel swab or squeegee to eliminate any leftover moisture in the barrel. If you’re at the paintball field then use a barrel swab to soak up most of the paint and oil on the inside of the barrel and then to use a squeegee to pull out any leftover paint residue.

Pro Tip: You can only use a barrel swab one time a day before it loses its effectiveness. While the fuzzy texture of a barrel swab is great at soaking up liquid (such as paint), it also leaves behind small amounts of paint and oil if you try to clean your barrel with it multiple times during a small time frame.

The reason you want to clean your paintball barrel by soaking it in hot water and dish soap is to ensure you have the best accuracy possible when you head to the paintball field. The problem with only using barrel swabs and squeegees is that neither can eliminate 100% of the oil and paint residue on the inside of your barrel, whereas dish soap and hot water can.

And I’m not just talking about the oil on the outside of paintball shells either. Many players like to oil their paintball gun by adding a few drops of oil to their ASA and then firing their marker to spread oil throughout their internals. Little do they know that by doing this they’re also shooting oil out of their paintball gun and into their barrel. Of course, the easy way around this is to simply take off your barrel before dropping oil into your ASA.

Or you can do what I do and only add oil to the parts of your paintball gun that need it.

Okay, now that you’ve removed both the air tank and the barrel from your paintball gun, it’s now time to take apart the marker itself.

For some paintball guns this will be as simple as unscrewing the back of the marker with an Allen wrench and pulling out the hammer and the bolt, whereas other paintball guns will feel more like you’re playing the board game Operation when you take apart the marker and put it back together.

Here’s a website (Pbmanuals.com) that has online manuals to almost every single paintball gun currently available. If you don’t have the physical manual to your paintball gun then this website is the next best thing. Simply check here to learn how to clean and how to properly perform maintenance on your paintball gun.

Step Four: Clean the Internals of the Marker

The next step is to clean the internals of your paintball gun.

To start this cleaning process I recommend you use a cloth or a paper towel to wipe down and remove any old paint, oil, or grease on your hammer, bolt, or other internals. However, if the grease on your bolt and o-rings is still clean and relatively new then I would just leave it alone for the time being.

You can also use Q-tips and rubbing alcohol if you need help cleaning anything out of a tiny crack or crevice or behind the grip frame of your paintball marker. If you’re using an electronic paintball marker you can also dampen your Q-tip with either rubbing or denatured alcohol (denatured alcohol works better for cleaning electronic components) to remove any paint or dirt that gets on your electronic board or eyes.

Make sure to read the owners manual for your paintball gun to ensure you’re applying the right kind and the right amount of lubricant to your internals.

If your paintball marker uses grease then I recommend only using Dow 33 as it’s the most suitable form of grease for paintball guns. There’s also a Dow 55 lubricant but I wouldn’t recommend using it as it can cause your O-rings to swell. However, if (for some reason) all you have is Dow 55 then you can use it as a last-ditch effort to stop an air leak. Just make sure to remove it immediately once you get home from playing and replace it with Dow 33.

Now if your paintball gun requires oil then I recommend using Gold Cup Oil (check price on Amazon) as it works extremely well and is considered the “Gold Standard” in the paintball community.

Step Six: Put Your Paintball Gun Back Together

You can also watch a video online to learn how to put your paintball gun back together, although I can’t guarantee your particular paintball gun will have a maintenance video online. Or that the video will be high quality and informational.

Step Seven: Clean the External of the Marker

The final step of cleaning a paintball gun is to clean off the outside of the marker. This includes the grip frame, body, trigger, regulator, ASA, feedneck, and any other part of your paintball gun you can visibly see. Cleaning inside the ASA is important as well as you don’t want to risk anything getting in there and damaging your threading.

Fair warning though, cleaning the outside of your paintball gun isn’t going to improve the performance any, but it will make your marker look better and help keep it in tip-top shape.

Just make sure to avoid using any form of paper cloth if you’re cleaning a paintball marker made from anodized aluminum. The problem with using a paper towel to clean anodized aluminum is that paper towels have been known to leave scratches behind as their texture is a bit coarse.

Instead, the best tools for cleaning the outside of a paintball gun are either a damp cloth or microfiber cloth and Q-tips or an old toothbrush. You can dampen the Q-tips with rubbing alcohol for optimal cleaning.

What Are Pepper Balls? | Are They Effective for Self Defense?

How to Find a Paintball Team In Your Area (Ultimate Guide)

How to Improve Paintball Gun Accuracy | 7 Tips to Shoot Straight

What Are Pepper Balls? | Are They Effective for Self Defense?

How to Find a Paintball Team In Your Area (Ultimate Guide)

How to Clean a Paintball Gun In 7 Simple Steps

V-Force Grill Review | Does It Perform As Good As It Looks?

How to Improve Paintball Gun Accuracy | 7 Tips to Shoot Straight

Pbreview.org is dedicated to answering your paintball related questions and helping you find the best paintball gear possible. We review all the latest markers, masks, loaders, accessories and more!
Contact us: admin@pbreview.org
© pbreview.org