If you’re not completely new to paintball, then chances are you’ve already dealt with the dreadful experience of your mask fogging up while in the middle of a game. One second you’re having the time of your life while running and gunning through the woods, and then before you know it the lens on your mask is so covered in fog that you can barely even see.

Whenever this happens, you’re essentially forced to lay back and do nothing until your vision is no longer obscured by the fog. Blowing your breath downwards through the bottom of your mask and wearing a bandanna to soak up sweat may help to slightly fix the problem, but neither will be an effective long-term solution if your lens is cheap or damaged.

But what if I told you that you can get a paintball mask with the same high-end lens as the Empire E-Flex and E-Vents for only a fraction of the price? Believe it or not, it’s true. You can buy the Empire Helix paintball mask with thermal lens for only around $5 more than what the actual lens cost itself. So in other words, you’re essentially paying $5 for a mask (price may go up).

While it’s usually never a good idea to be too cheap when buying a paintball mask, the thermal lens on the Empire Helix does make it a suitable purchase for beginners. Even if you end up wanting something better later down the road, you can still keep the Helix as a backup mask or use it to lend it out to friends.

Sure, the Helix may not come equipped with all of the fancy features you’ll find on the E-Flex and E-Vents, but at least your vision will be clear and you can play to your fullest ability.

So why is the lens on the Empire Helix so much better than the lens on other affordable masks? Well, while most beginner paintball goggles use a single pane lens with an anti-fog coating, the Helix uses a thermal, or dual-pane lens that is much less likely to fog.

What makes the thermal lens so much more resistant to fog is simply the addition of another (much thinner) lens behind the thicker outer lens that is already used for protection. These two lenses are then separated by a foam gasket to allow a thin layer of air to reside in-between them. This thin layer of air acts as a sort of insulator to keep the temperature between the two lenses from being too drastically different. This ensures that your lens will never fog unless you’re playing on an extremely hot and humid day – sorry fellow Floridians.

On the other hand, with a single pane lens the second the heat and humidity inside your mask come in contact with the cooler temperature of the lens then condensation will begin to form almost immediately. And while you can buy anti-fog spray to help fix the problem, it won’t be anywhere near effective as a dual-pane lens.

Fortunately, being virtually immune to fog is only part of what makes this Empire lens so great. It’s also one of the best lenses you can buy to increase your peripheral vision and overall field of view. If you’re used to playing with a mask that has a much smaller lens then be prepared to see a HUGE difference when you finally strap these on.

While the most important part of a paintball mask is definitely the lens, the mask itself is also highly important as well. With many low-budget masks your face will often be left overly exposed and cause you to risk getting hit by a paintball in the lower jaw or ear. This risk is far less likely when using the Empire Helix, although some consumers have noted that even this mask may not fit perfectly if you have a rather large head.

Another feature you have to worry about when buying a paintball mask (especially an affordable one) is the goggle strap. The goggle strap or “back strap” is what’s responsible for keeping the mask tight and secure on your face at all times. If you’ve ever used one of those cheap paintball masks that come included in a beginner package then you’ve probably already experienced firsthand how the strap can slide around on the back of your head.

Luckily, the back strap on the Empire Helix is extremely well-made and comes with silicone beading to keep it from moving around. A removable chin strap is also included as well to further ensure safety. Other features that make this mask great for protection are the removable visor and hard plastic body.

Thankfully Empire was smart enough to build the visor so there was little space left between it and the top of the mask, thereby eliminating any possibility of a paintball sneaking in and smacking you on the forehead. And even though the hard plastic body may not be good for bounces, it sure does a great job at protecting your face.

Are you tired of wearing a paintball mask just to have your glasses crammed into the side of your head as you play? Well, fortunately for you, the foam on the Empire Helix is separated into two pieces to leave a slot for the frame of your glasses to fit into. There is also plenty of space left behind the lens as well to allow for even the thickest of frames to fit comfortably.

What Consumer Reviews Have to Say About the Empire Helix

Of course, not every review of the Helix paintball mask was overly positive. Some consumers complained that the foam was uncomfortable and would often soak up too much sweat as they played. While I can somewhat agree with this statement, I can also truthfully say that the foam on the Helix is much better than what you’ll find on most other masks in the same price range. If you really find it to be too uncomfortable though you can always purchase replacement foam to fix the problem.

Another common complaint you’ll often hear about the Empire Helix is that there isn’t enough ventilation. The sad reality though is that the Helix used to actually have side venting as well until Empire decided to change the mask to what it is now. You may find that when you go to purchase the Empire Helix online it will still show the original mask with side vents. Unfortunately, this is not the mask you will get and instead it will look more like the picture below.

Besides the foam and ventilation though there really isn’t much else you can complain about when it comes to the Empire Helix. For the price it’s one of the best paintball masks you can buy as a beginner and it even works great as a backup as well. Many players who own the E-Flex or E-Vents will actually buy the Helix whenever they need a new lens just to have the mask as a spare. Simply put your old lens in the Helix and you now have another mask and you didn’t even have to waste a lens! 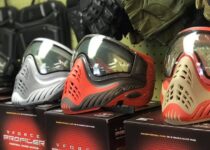