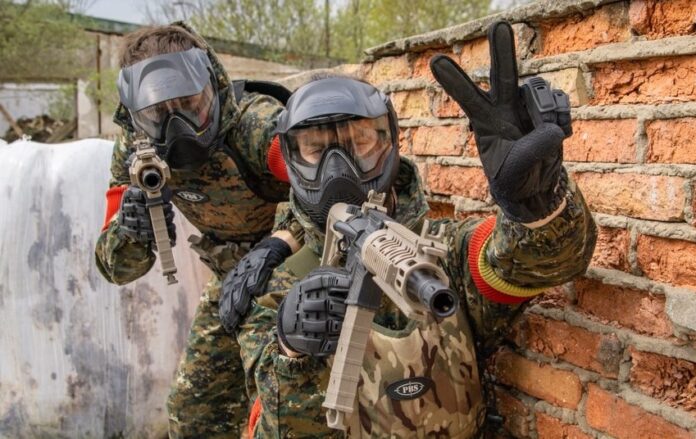 But how do mag fed paintball guns work?

Let’s find out below.

Unfortunately, only SOME of the mag-fed paintball guns can actually use First Strike rounds. So if you do plan on buying a mag-fed marker, then you need to make sure that the one you’re buying can accept FS rounds before you make the purchase.

There are many other benefits to using a mag-fed paintball gun, but we will get to that further below.

The reason being is that you would probably have more fun as a beginner using a loader that can carry a few hundred rounds at a time, versus a magazine that limits you to only using 10 – 20 rounds at a time. Fortunately, some mag-fed paintball guns such as the Planet Eclipse MF100 and the Tippmann TMC can convert from magazine to hopper in a minute or less.

Then there’s also paintball guns such as the Dye Assault Matrix that can convert from magazine to loader with the simple flip of a switch!

In addition, using a loader gives your opponent an easy target to shoot at since it’s the first thing they’ll see when you stick your marker out from behind the bunker.

Using a mag-fed paintball gun comes with its advantages and disadvantages. Here are some of the advantages below:

Here are some of the disadvantages below:

But of course, mag-fed paintball guns aren’t for everyone.

Only being able to shoot 10 – 20 paintballs at a time can put you at a huge disadvantage when you’re facing against players that are using electronic paintball guns with 300-round hoppers. But if you’re up for the challenge and want the “true Milsim experience”, then maybe a mag-fed paintball gun is right for you.

If you really want to test out a mag-fed marker before you buy one, then you may want to check your local paintball fields and see if any of them have mag-fed markers for rent. You’d be surprised at the number of fields that cater to mag-fed players nowadays. Or if you’re lucky, you might be able to buy a conversion kit for a paintball gun you already own (such as the Tippmann 98 Custom) and transform that into a mag-fed marker.

Co2 vs. HPA: What’s The Best Air Source for Paintball?

My name is Evan Graham and I’m a paintball sniper. I’ve been playing woodsball, rec ball, and scenario paintball since 2007. After playing hundreds of games and attending scenarios all over the state of Florida, I decided it was time to give back and help the paintball community at large. I hope you enjoy my paintball guides, tips, gear reviews, and more!

Co2 vs. HPA: What’s The Best Air Source for Paintball?

Pbreview.org is dedicated to helping you find the best paintball gear possible. We review all the latest markers, masks, loaders, accessories and more!
Contact us: admin@pbreview.org
© pbreview.org